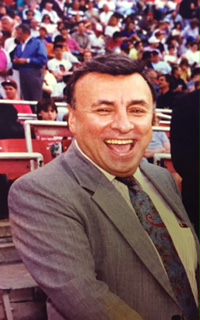 Gerald Blaise, 84, passed to His Lord on Friday, June 7, 2019. He leaves his wife of 35 years, Linda (nee Ujobai) Romeo. He is survived by his sister Dolores Greenstein, a niece Barbara (Barbs) Hammond and he husband Rick, a nephew Mark (Scooch) Romeo and his wife Jane and their wonderful children. A nephew Willy, a brother Tony and sister-in-law Marcia and sister-in-law June preceded Jerry in death. Jerry’s beautiful life will forever be cherished by his devoted nieces Amanda and Melissa and nephew Jo Jo, sister-in-law Evie and brother-in-law Joe and many friends.
“Romes” began his social work career in New York City working with juvenile gangs and foster children through Angel Guardian Homes. He also spent time at the New York Stock Exchange.
His Philadelphia relationships began in the late 70’s when he accepted the position of Director of the South Philadelphia Community Center. Jerry guided the direction of the clubs with his bigger than life personality and his consummate professionalism. It was there that he met Mike Walker and developed many new 40 plus year friendships.
When the executive directorship of the Philadelphia Boys and Girls Club became available it was obvious Jerry Romeo was the perfect choice. He chose to adopt our city as his home but Philadelphia adopted Jerry, and in the process, he worked with some of Philadelphia’s most influential leaders and therefore succeeded in attaining the apex of his social work career.
Jerry earned the title “Father Fatima” because he took the time to listen before offering his sage advice.
His retirement was spent at his beloved beach house with his family and friends. Jer loved nothing more than being surrounded by the people he loved while eating, drinking, and most of all laughing. A very dear friend from New York City noted that Jerry’s contagious laugh caused others to laugh right alongside him He was always up for an adventure whether it was tubing on the river, losing his toupee in the ocean, playing a “quiet” game of acey deucey in the ski chaletor, or making up fake words in scrabble. “Romes” was a free spirit and accordingly chose to dance his way through life.
Jerry’s friends and relative are invited to his visitation on Monday, June 17, 2019 at 9:00am at the Stolfo Funeral Home, 2536 S. Broad St., Philadelphia PA 19145. Service will begin at 10:00.
In lieu of flowers donations to Philadelphia Ronald McDonald House, 3925 Chestnut St., Philadelphia PA 19104 are appreciated.